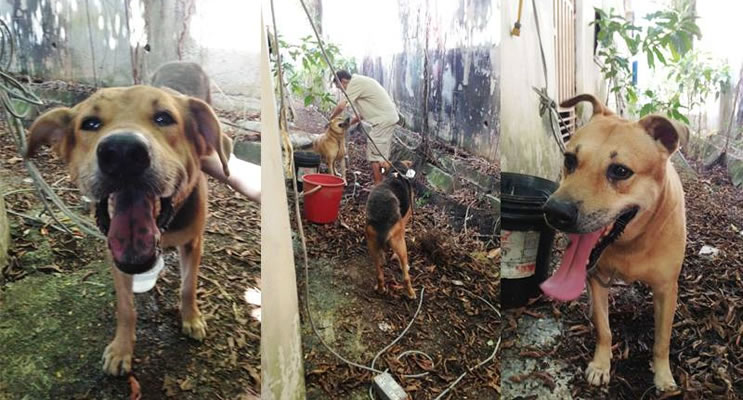 15 JULY 2013: UPDATE
Shelby & Mustang were brought to the vet but due to existing heart worm, they weren’t able to be sterilized immediately. The plan is now to get them on adequate medical care till they’re clear for the procedure.

On a brighter side, their new “family” is excited and supportive of having them at the factory! Here’s Kumar, the wonderful K.A. Building Construction worker [pictured] receiving them at their new home. We think Shelby & Mustang like him too!

Apart from rallying his coworkers to build a giant cage for them to get settled into, he’s also agreed to feed them their heart worm medication twice daily despite his busy schedule. We are indeed blessed to have kindred souls like Caren & Kumar out there.

–
13 JULY 2013: UPDATE
Meet Shelby & Mustang! We decided to go with their new snazzy names, them having been brought up in an auto shop and all.

The 2 boys were taken to the vet this morning for their vaccinations and were found to be heart-worm positive. This means we can’t go ahead with sterilization as planned. But there’s good news – K.A. Building Construction Pte Ltd has kindly offered to take them in.

So, volunteers bathed them and scrubbed down the current factory space so they can at least have a clean environment while arrangements are made to relocate them. We were shocked by the amount of fur they shedded! The poor boys probably never had a bath in their lives and the hot concrete floor had caused horrible scabs on their joints over the years. With our shelter packed to the brim and the escape of Cripply, we do not want to run the risk of another 2 runaway acts. They’ve been taken off their old rope leashes and given new safer cables – long enough to roam, short enough to not get entangled. The factory guard that was previously afraid of them has even taken to buying them food (spying the uneaten vadeh left overnight)! We are so grateful for these silent heroes that live amongst us.

All clean and groomed, Shelby & Mustang looked on excitedly on the way to recce their new home. We were apprehensive about how they would take to the new environment as it’s common for dogs to escape unfamiliar surroundings. Our fears were allayed when we got there. Kumar, the caretaker of the new factory took to them immediately and they were welcomed by a posse of factory personnel – there are even plans to build them kennels! The excited boys took a walk around the compound and seemed to take to it well. We are very, very hopeful!

Lo and behold, we didn’t expect to find another girl. Local black cross, with a broken leg. She’s a regular face around K.A.’s compound and we learnt that Kumar has been feeding her. As Shelby & Mustang can’t be sterilized, SOSD has agreed to take her in for a vet check and to sterilize her instead – to prevent future unwanted litters.

Thank you Caren and K.A. Building Construction for stepping forward and everyone else who offered help! We will be keeping you updated 🙂

–
10 JULY 2013: BACKGROUND
A warehouse tenant along Kim Chuan Terrace got sealed off by authorities yesterday. Their 2 dogs have been abandoned, tied up with wires & barking at the back since. The warehouse has been vacated. The owner of the property has given us 1 week to rehome them. According to the caretaker uncle, he’s been looking after them for 8-9 years since they were puppies but the evicted company has told him to release the dogs at Tuas.

SOSD has agreed to send them to the vet, get sterilized & their temperament will be assessed by our trainers. We cannot take them in due to space constraints and are hoping to find a factory or warehouse that will adopt them as they have very little chance to find a home. They’d be released with no survival skills otherwise.

One of our rehomers went down to assess the situation and found the 2 boys to be friendly, not aggressive at all and are about 8-9 years old. They have so far been given food and water and one of the dog’s minor wound will be attended to tonight. But this is not sustainable.

Please email [email protected] if you can help to foster or if you have business contacts that are willing to take these 2 boys in.