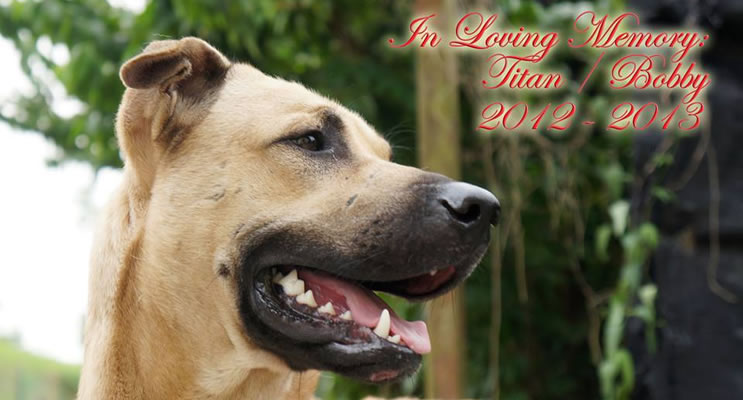 12 JUNE 2013: GOODBYE TITAN
Dear friends, Titan passed away this morning. His body finally gave up, and he vomited blood before leaving his failing body.

Titan left his old home a healthy boy, abandoned away from home, but came back in a urn. It is really tragic. And a sombre reminder about the impermanence of life.

–
11 JUNE 2013: UPDATE
He is still not eating or drinking, and is not producing urine again.

The diarrhea has gotten worse, but cos he hasn’t eaten in so many days, nothing is coming a gross smelly yellow fluid. This liquid contains the Distemper virus which is eating him away.

His balls have become very red and swollen. Will have to check with the vet why tomorrow.

–
10 JUNE 2013: UPDATE
Titan was dumped cos he bit someone, and he wandered, lost, and ended up in Everton Park. That is how Dr Song came to rescue him. It’s a really sad story. His old owner came forward today.. and got reunited with him.

After last night’s fluid challenge, Titan is producing urine again! As long as his body functions do not shut down, we still have a fighting chance.

We have been going down twice a day to treat this boy, in the hope that he will make a turn for the better. So far, no sign of that yet. Colloidal Silver for him will come tml.

–
9 JUNE 2013: UPDATE
Titan is not doing well. When our worker Nipu reported that he still has not peed today, meaning he is still very dehydrated, we rushed down to give him another dose of fluids.. Just finished treating the poor boy.
He is unable to eat or drink, and is having horrific amounts of watery diarrhea, making the dehydration worse. The fluid on the floor you see is his diarrhea.

Distemper is a horrible disease. Where most will give up, we refuse to, as we believe in giving our dogs a fighting chance. Even when our vets cannot house our distemper dogs, we will work with them to treat them in our shelter itself, with our members taking turns to do our part.

This is the commitment we have to each and every dog. Whether it is a Sunday night, or weekday morning, we will always be there for them. Do not ever believe anyone who tells you we do not treat our dogs well.

–
8 JUNE 2013: UPDATE
Titan, rescued 3 weeks ago by Dr Song, may be our newest case of Canine Distemper.

Despite surviving quarantine without any problems, the poor boy started showing signs of the deadly disease 2 days ago. He was on his deathbed yesterday, but after the combined efforts of Dr Song, Nipu and our volunteers, his is better today.

The poor boy refuses to eat or drink, is severely dehydrated, weak (yet still manged to destroy our water pipes) and painfully thin.

We are doing all we can to save his life. Dr Song & Dr Siew came down to treat him this morning.

One day, one of the factory pple drove Titan to Redhill, and dumped him there, as Titan had bitten someone. Titan became a lost stray dog, wandering, until he came to Everton Park, where pple wanted to call AVA to remove him, but Dr Song rescued him in time.

Titan was unceremoniously dumped away from home. Now we understand why he keeps trying to escape. He merely wanted to go home with his loved ones.

The man’s act of dumping Titan resulted in his almost losing his life once, and now again, to Distemper. We told his owner to give the man a lashing for such an irresponsible act.

Through Facebook, his old owners found him again, and visited him today. He is still very weak, but he recognised them. We hope that seeing them will give this boy some fighting spirit – his will seems to be waning day by day.

Titan used to be called Bobby. Maybe this boy survives the hardest ordeal of his life.